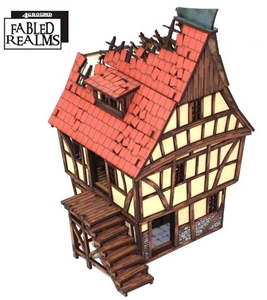 4Ground Terrian- Damaged Mordanburg Highstreet Building#1This highstreet building has been gutted by fire; rather a common health and safety issue for any town watch warden or city fire guard who lives in a fabled realms town. Such towns and cities are less likely to suffer arson from siege warfare than the flaming distraction to day to day life often caused by passing dragon-strike! Also where gang street fights are common such as in the Port City of Mordanburg, a fair share of these disturbances include those fought among rogue mages and when magic users get involved it usually inflames the situation.As the first of the damaged high street buildings for the port city of ‘Mordanburg’. It comes with external detailing which includes heavy fire damage, whether alchemical, natural or magical, showing burnt and damaged timbers and holes in the plaster work, with the option to have either half stonework inserts or all plaster inserts between the timber framing on the ground floor storey. The second storey is accessed from the external stairway, the configuration of the ground and second storey can be altered to give different perspectives to this building. It has also been designed so that by mixing the storeys from the undamaged building with this one, two lesser damaged buildings can be assembled. Internally there is a high level of detailing, the doors to this building work, it has a working trap door on the ground floor and also another working trap door in the second storey floor. The roof comes off to give access to the third storey and the second storey comes off to give access to the ground floor during in game action.For newcomers their first taste of ‘Mordanburg’ is often when they land at one of the many quays or wharfs on the docks of ‘Mordavig’. They have often dreamed of coming to this city to join an adventurous fellowship and with them find fame and fortune. A very few do find their fortune, but for many more they will live and work on the highstreets as shopgirls or errand boys becoming barkeeps and chambermaids. Some that are strong and look honest enough might join the ‘Mordavig Watch’ or even the ‘Anburg Guards’. All of them have one thing in common, a place they call home, somewhere in this city to sleep at night. Some will live in the seedy backstreets or down dark alleyways others will live up a ladder on the second or third floor of the highstreet shop, or bar they work in.28mm Scale models supplied unassembled. Miniatures not included and for scale purposes only