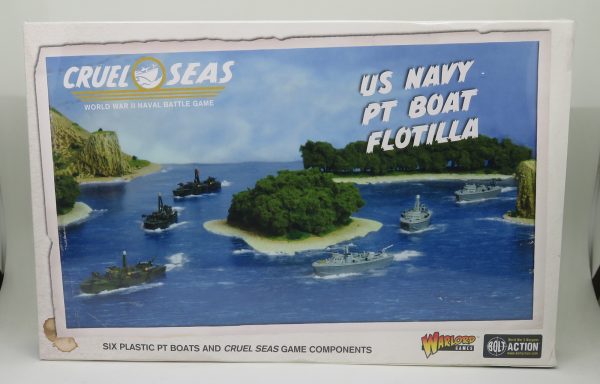 Warlord Games – Cruel Seas US Navy PT Boat flotilla
On December 7th, 1941, the US Navy could only boast 3 squadrons of motor torpedo boats, or PT boats (patrol torpedo) as they were named. PT squadron 1 was based on Pearl Harbor and the 12 boats opened fire on the incoming Japanese bombers, claiming 2 planes downed for sure and others damaged. Squadron 2 was based in Manila Bay of the Philippines and had a similar introduction to their war, shooting down a few attackers and learning that fast boats were a tricky target for bombers. Squadron 3 was in New York working up and would later see great service in Guadalcanal.
The PT boats fought all over the globe, from Pearl Harbor to the Philippines, the Adriatic and Mediterranean and also in the English Channel. They achieved many successes, particularly in the last two years of the Pacific War they accounted for many stalking float planes and many hundreds of barges which were the lifeblood of the overextended Japanese army. This barge hunting was a gruelling business and needed a certain ruthlessness on the behalf of the American crews, Japanese soldiers and sailors being loath to surrender, hence a grizzly end to many a barge crew.
Contains: Six plastic PT boats (3x Elco & 3x Higgins)