Osprey- On The Seven Seas 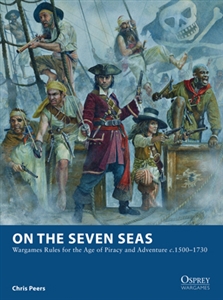 Osprey- On The Seven Seas

Osprey- On The Seven SeasWargames Rules for the Age of Piracy and Adventure c.1500–1730Author: Chris PeersIllustrator: Steve NoonAbout this bookOn the Seven Seas is a set of wargames rules covering the high adventure and low morals of the world of the pirate. The rules cover licensed privateers such as da Gama and Drake, ruthless pirates of the Spanish Main, Blackbeard, the Barbary corsairs, the wako of the Far East, not to mention the anti-pirate squadrons, Spanish garrisons and native warriors from around the world that found themselves at odd with generations of sea-borne reavers. The focus of the game is on boarding actions and the exploits of pirate crews on land, and the rules offer a quick-to-learn basic game based around individual characters and small units of rank-and-file.ContentsIntroductionThe Battle RulesCharactersNaval EncountersCampaigns and AdventuresArmy ListsQuick Reference SheetPaperback; August 2014; 64 pages; ISBN: 9781472801401