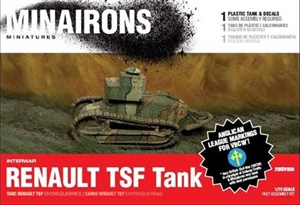 Minairons – 1/72 Renault TSF Tank – Boxed kitBoxed set of 1 fast assembly model kit, mostly made of hard plastic, with some resin parts. Decal sheet with national markings for SCW Basque & Republican, French and VBCW Anglican League tanks. Assembly instructions and Painting scheme on box reverse.In 1922, Spain bought from France one Renault TSF, along with eleven FT-17s, for use as a command vehicle in Morocco. After the Rif War it was returned to Spain and was last seen in 1931. It is likely that during the Civil War it was converted into a normal fighting FT-17.Model miniature kit supplied unpainted and unassembled.