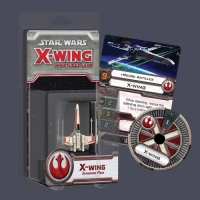 Star Wars X-Wing X-Wing Expansion PackX-Wing: X-Wing Expansion PackAs the primary starfighter of the Rebellion, the X-wing is a well-rounded machine that features powerful deflector shields and potent laser cannons, and can be armed with deadly proton torpedoes. The X-Wing Expansion Pack for the X-Wing Miniatures Game contains one striking X-wing miniature, plus its necessary cards, tokens, and dial. Also included are four skilled pilots, including one of the Rebellion’s most distinguished and capable pilots, Wedge Antilles.This is not a complete game experience. A copy of the X-Wing Miniatures Game Core Set is required to play.