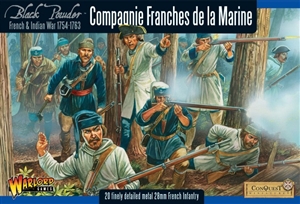 Warlord Games – French Indian War 1754-1763: French Compagnie de la Marine boxed setThe struggle for North America and Canada pitted Great Britain against her old enemy France once again. The victor would hold North America in their grasp – a not inconsiderable prize.To protect her vulnerable colony of New France, units of troops were formed both locally and from the old country. Formed into companies (led by a captain from which each unit would derive its name) they fought against Indians and the British with great skill inflicting a great defeat on General Braddock and his brave but outclassed redcoats. These units took up the name given to their forebears over 100 year previously by the Red Eminence himself, Cardinal Richelieu – the Compagnie Franches de la Marine.They usually paraded in a white and blue uniform, but could also use all manner of protective clothing and snow shoes for their winter raids, with more and more local attire supplementing their official uniform as time progressed. The soldiers of the Compagnie Franches de la Marine became consummate woodsman by necessity and attempted to pass this fieldcraft on to newly-landed regular infantry units, as to go to war in the American wilderness devoid of such skills was to invite deprivation and disaster.Although ultimately defeated by the daring British officer Wolfe’s raid on Quebec, the Compagnie Franches de la Marine were often outnumbered but rarely outclassed, giving a good account of themselves in the savage fighting across the frontier.This metal boxed set contains 20 metal miniatures (includes Captain) armed with muskets, pistols, swords and tomahawks. It ably support the existing boxes in the range…Boxed set contains 20 metal figures – 1 Captain and 19 French soldiers armed with musketsNote: Models supplied unassembled and unpainted