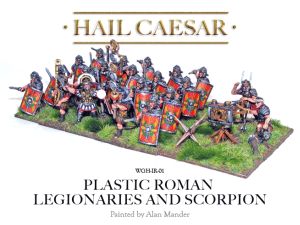 Warlord Games – Imperial Roman Legionaries and Scorpion boxed setWell-drilled, and clad in his segmented armour the Legionary was the lifeblood of the Roman war machine – there was no kingdom or state that could withstand the unforgiving Legions of the Roman empire…This boxed set contains 20 multi-part, hard plastic 28mm tall Imperial Roman Legionaries.Comes replete with options to arm them with pilum or gladius and with great extras such as spare helmets, pila, shields and a cavalry helmet with metal faceplate!Also contains superb, full-colour waterslide shield transfers to bring your models to life!Note: miniatures are supplied unassembled and unpainted.